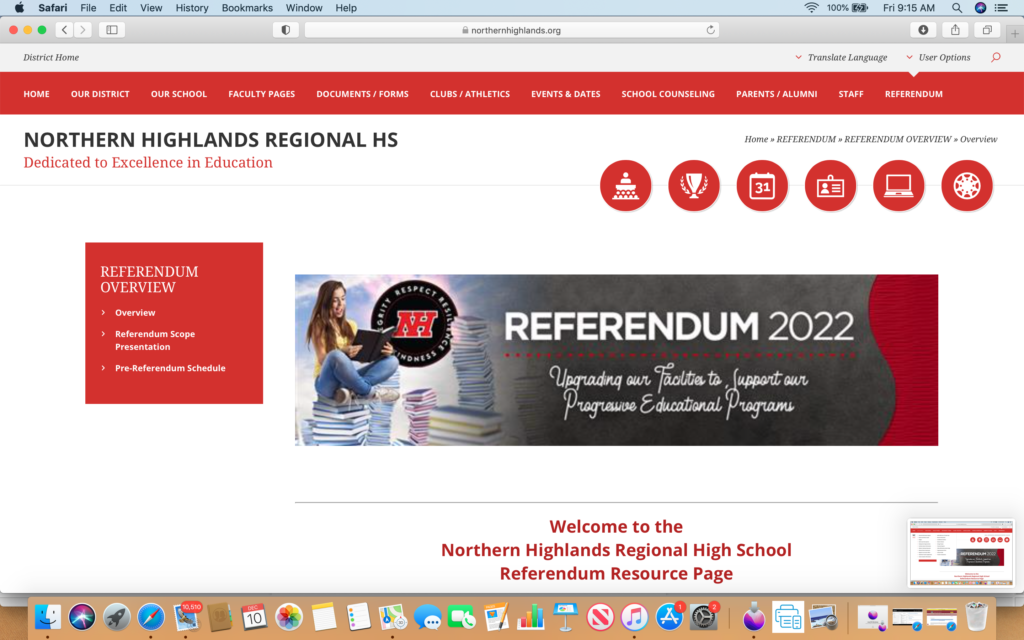 A $7.73 million referendum vote of a total $8.83 million construction project, which would fund primarily upgraded athletic and also academic facilities at Northern Highlands Regional High School (NHRHS), is scheduled for a public vote on Tuesday, March 8, 2022. The project was presented by Superintendent Scot Beckerman and architect Frank Messineo, principal and founder of Solutions Architecture, at the USR Mayor and Council meeting of December 2, 2021.

The proposed construction project would include the following:

The total construction project is forecast to cost $8.83 million. The school has been approved by the New Jersey Department of Education for a $1.1 million grant for the project. This leaves $7.73 million to be requested of the voters in the referendum for a 15-year bond issue scheduled for March 8, 2022. The superintendent reported that a current debt service for the science wing referendum paid by local taxpayers will end in 2022, thus causing this referendum to be approximately equal to what is already being paid by taxpayers. Current Upper Saddle River households, on average, now pay $313.88 per month for the current bond issue which would be replaced by the projected new 15-year bond issue at $269.48 per month, reported Mr. Beckerman. Allendale households now pay $256.15 per month and are projected to pay $219.92 for the new bond issue. Thus, the new referendum, if approved, will have no impact on taxpayers’ tax bills, the superintendent said.

Some construction projects could start in the summer of 2023, while other projects that require more design time could start in 2023 or 2024, Beckerman said. For more information, go to https://www.northernhighlands.org, and click on the “referendum” tab on the upper red bar.

Appropriations voted on by the council in September for repairs due to Tropical Storm Ida were repealed because better means of funding have been made available.

The Saddle River Garden Club was recognized for the many decorations that were created and displayed throughout the Borough of Upper Saddle River.

A resident expressed concern about the new approach flight pattern which has brought more loud noise from air traffic over Upper Saddle River. Mayor Minichetti recommended that residents file complaints the Teterboro Airport Noise Office at 201-288-8828, or noiseoffice@teb.com or online at https://aircraftnoise.panynj.gov/teb-airport-noise-office/.  Residents may also contact the FAA directly by emailing 9-aea-noise@faa.gov or by calling 718-553-3365.