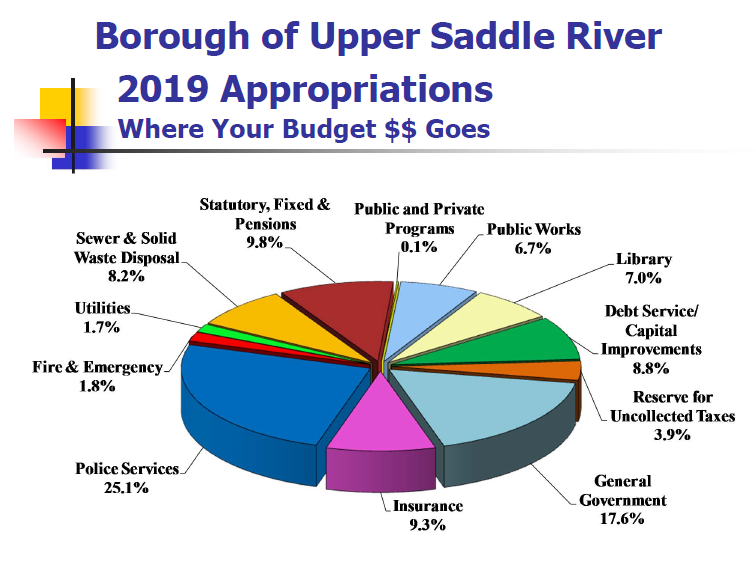 The meeting was then open to the public for questions regarding the budget:

Marshall Grupp, a candidate for Mayor, addressed the council. Mr. Grupp thanked Mr. Lerch for his presentation and stated that it was very helpful.  Mr. Grupp also asked several questions regarding the budget and the Mayor told Mr. Grupp to direct his questions to the accountant, Mr. Lerch.

Mr. Grupp asked whom had put the budget together.  Mr. Lerch answered that it was first created at the Administrative level (Mayor and Council), then the Finance Committee and then the Accountant.

Mr. Grupp also asked Lerch if he would recommend that USR put together a monthly Profit and Loss Statement (P&L), as many other towns do. Mr. Lerch stated that he thought that would be a good idea.

Mr. Grupp then asked why the borough’s Chief Financial Officer (CFO) was not present and why did he not sign the budget. Mr Lerch stated that he did not know why the CFO was not present. He also stated that although Mr. Lerch signed the publicly available copy, there should be another copy of the budget signed by the CFO.

Mr. Grupp then inquired why the fund surplus was down.  The surplus has been significantly reduced by $445,000 (or 32%) to $945,000 from $1,387,000.  Mr. Lerch attributed it to nuances with the State of New Jersey accounting for Interfund Receivables. Mr. Lerch did not address what this amount of Interfund Receivables was comprised of. Mr. Grupp asked if the reduced surplus would affect USR’s bond rating.  Mr. Lerch stated that it can definitely be a “significant factor” in reducing USR’s bond rating by the rating agencies.

Mr. Grupp inquired about the $17,110 Special Item.  Mr. Lerch stated that the money is a grants appropriation.

Mr. Grupp also asked why the Maintenance of Parks expenditures increased by $25,000 (83%) from $30,000 to $55,000.  Mr. Lerch stated that he did not know why these expenses had increased and stated that the CFO could provide this information.

Mr. Grupp inquired how much is in Reserve for Accumulated Absences at $1.5 million and how does the borough decide how much is accounted for every year. Mr. Lerch responded that $100,000 is allocated in the current budget, and a determination is made every year based upon the projected annual retirement payout.

Mr. Grupp asked about the Emergency Authorizations listed. Mr. Lerch stated there were $90,000 in 2018 legal fees and $230,000 in solid waste disposal tipping fees.

Mr. Grupp asked for the schedule of bonds over 10 years.  Mr. Lerch stated that he would need to make do an Open Public Records Act (OPRA) request to get this information.

Lastly, Mr. Grupp asked why the Capital Expenditures plan only have bonding for this year, and shouldn’t it be over the next three years, especially with the increased housing being built. Members of the Mayor & Council stated that they did not think it was required.

The Budget was voted on and passed. This was done without borough residents being provided with a budget that was certified and signed by the borough’s chief financial officer.

Mayor Minichetti announced the appointment of a Stigma Free committee.

The meeting was then open to general questions from the public.

Richard Medina pointed out that we are entering the political campaign season, and that there would be numerous campaign volunteers from all campaigns, canvassing in town. He therefore requested, in order to avoid any misunderstandings or confrontations with law enforcement, that it be made clear through a Swift 911,  that the No Knock ordinance does not prohibit political campaigning. He also asked the Chief of Police direct his officers that political campaigning is not covered by the No Knock ordinance. Although Borough attorney Regan confirmed that this is the case, the request was denied by the Mayor & Council

Ms. Blackmore discussed the clogged pipes in front of her property and claimed it was the responsibility of the town.  Mr. Regan, Borough Attorney, is reviewing her documentation and asked for any additional documentation she might have in order to make the determination.